We got  a PHONE CALL from Imre!

Imre called from a public phone using a calling card purchased ahead of his trip. He is doing OK.

On the first few nights he could barely sleep, and during the day he often found himself dozing off on the water. That’s not safe at all. After a few days he started sleeping better and developed a daily routine, so that packing up in the morning and settling down for the night do not take too much thinking or energy.

He doesn’t eat much, and strangely, just doesn’t need more. Every morning he boils three cups of water. One he prepares for coffee (3-in-1 single serve instant coffee), that is for breakfast. He carries two small hot food containers. In one he makes a simple noodle soup, in the other one instant hot chocolate. At lunch time he enjoys these, still hot. As he is getting ready to stop for the day, still on the water, he eats a couple cereal bars (he always hated those) and that’s it. 8 hours of kayaking is supposed to use about 3500 calories. Add that to the 2000 he would normally eat sitting around all day – that is 5500. But he simply doesn’t feel like eating more, especially not any more cereal bars. We agreed that now in Dawson, he should buy some food that gives him better nutrition. He keeps drinking water within easy reach, and he makes sure that he is well hydrated.

His right wrist is causing him a lot of pain. He has been wearing a wrist brace for the past three days. It seems the wrist brace was not designed for this kind of use (of course) as it is already falling apart. All we can hope for is that his wrist will get used to the torture and get better – which is of course just the opposite of the “you need to give it some rest” type of advise, each of us would normally offer.

After each 30 minutes of paddling, Imre takes a 15 minute break just drifting. This is how he effectively paddles 8 hours in 12 hours each day. This plan will work for a while, but later the river will become very wide and drift will decrease to almost nothing.

Imre said the scenery is breathtaking. There were days when he paddled all day without seeing any sign of people: not a road, not a rundown hut, not even a piece of garbage. Just pure beautiful wilderness. He saw some mountain lions and many birds. He saw one bear on the first day, none since then. However one night he heard a couple of extremely loud roars from probably not too close. He is expecting to see more bears in Alaska.

For now he is two days ahead of schedule, which means he would arrive to the Bering Sea two days early. Imre gave us the distances he covered each day. It turns out our estimates were sometimes too cautious, but not that bad at all. Now we go back and edit each post to display the right distance accomplished for the day.

It is a challenge for Imre to stop to buy food or anything else. He needs to leave his kayak and most of his gear (all together 200 lbs) at the river, hoping that they will still be there when he returns. In Carmacks, he did just that. We failed to ask how he secured his gear today when he arrived to Dawson. All we know is that he spends the night in a motel and enjoyed a well deserved hot shower. He will try to mail the first flashcard with pictures and videos, since it is the weekend he might not be able to. 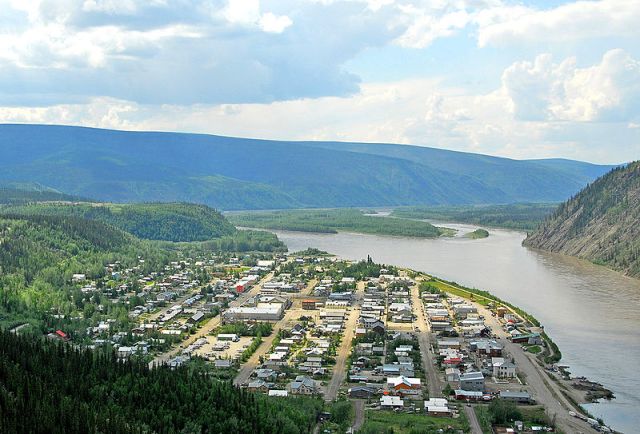 Peter and Janos Kabai crossing the US on bicycles to promote the Blind Judo Foundation
View all posts by gojudoka →
This entry was posted in Uncategorized. Bookmark the permalink.